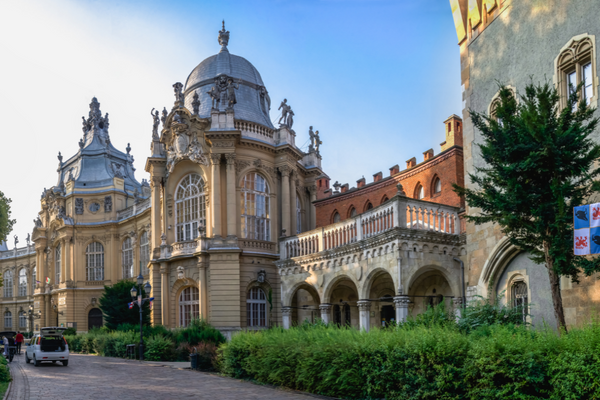 Hello From Ottawa: Getting In Touch With Farming At The Canadian Agriculture Museum

After my very interesting introduction to sheep shearing and all sorts of wool processing techniques, I had a chance to link up with David Sutin who is the Communications, Marketing, and Farm Operations Manager for the Canada Agriculture Museum. In fact, Ottawa is the only world capital that has a working farm at its heart. David volunteered to give me a personal tour through the various facilities of the Museum and we started with the Dairy Barn. Right, when you come in is an area for the “dry cows”: these are pregnant animals that stop giving milk in the two months before giving birth. David explained to me that the gestation period of cows is very similar to that of humans: 9 months.

David elaborated that male calves get moved into the sale barn and sadly enough, eventually they end up being processed into veal. On the other hand, the Museum keeps the female calves so they can grow up into milk cows. The Canada Agriculture Museum is home to a variety of different dairy cattle breeds and the most productive of them all are Holsteins. Jersey cows were imported from islands in the British Channel and I was just amazed at the beautiful faces and the huge, long-lashed eyes of these cows. The Canadienne cows were brought over from Europe by immigrants from France since they are hardier and better able to withstand the harsh Canadian winters although they are not highly efficient milk producers.

Every day the herdspersons at the Museum milk the cows at 6 am and 3:45 pm. The electric milking machines are connected to an overhead pipe system that leads into a 2500-liter storage tank where all the milk from the cows is collected and cooled to a temperature of 0 to 5 degrees Celsius. The milk is agitated for even cooling. Each cow actually drinks a bathtub of water every day and produces 30 liters of milk. The milk of the cows is picked up every couple of days by the milk truck. David explained when a cow is sick and receiving antibiotic treatment, the milk is not allowed to be collected and actually gets washed down the drain.

We then continued into the maternity area that is also used for isolating sick animals. David mentioned that occasionally cows will suffer from a “twisted flipped stomach” (a cow’s stomach actually consists of 4 separate parts) and this condition requires surgery. The veterinarian opens the cow’s side with a 30 cm cut, manually twists the stomach back to the correct position and sews it onto to the abdomen wall. The whole procedure doesn’t take much more than an hour and is performed right in the barn, definitely not under sterile conditions. But the animals always seem to come out okay.

The cow barn is not air-conditioned and in the summer it gets pretty warm in the building. At night the cows are taken across the property to a night pasture where they are allowed to graze the whole night and they are taken back into the barn by 6 am. Year-round the cows is fed “corn silage” which is made of ground-up corn plants, stalks, and all. The entire milk production is a big revenue producer for the Museum and offsets some of the operating costs.

From the Dairy Barn, we went into an exhibition area that featured a variety of samples of historic farm machinery. The “Beck Circus”, dating back to 1912, was a piece of demonstration equipment that was used to show how electricity could make a farmer’s life easier. The Hydro-Electric Power Commission came up with this contraption to show farmers the operation of a variety of electrically powered devices, e.g. vacuum pumps for milking machines, a rocker churn to make butter, a feed grinder, a windmill pump, and an electric washing machine. These were the early days of electrical power when most farm works was still done completely manually, only assisted with the help of farm animals. It’s hard to imagine how the quality of life of farmers must have improved with the advent of electric power.

David took me to an exhibition of farm tractors: originally they were large, powerful yet very dangerous machines. Through various technical innovations, they were still large and even more powerful, but they became much safer to operate since working parts were no longer exposed. The Canada Agriculture Museum features a variety of tractors. One of the exhibits is hands-on; you can actually climb up into a tractor’s seat, flick the switch and experience the bumpy, bone-jarring uncomfortable ride of an old-style tractor with metal wheels. Then you change the setting and you see the difference of how much smoother the ride is with rubber wheels. Another innovation that we don’t even think about today that made life so much easier for farmers.

Another tractor was actually a hybrid vehicle from the 1930s, consisting of a car chassis and motor carriage that was converted into a farm tractor. Apparently, the vehicle was neither particularly adept at being a passenger vehicle nor at being a tractor. The next big innovation on display was the “Cockshutt Tractor”, built in Brantford, Ontario, which could have a manure spreader or other implement behind that was powered by the tractor’s engine without the necessity for the tractor to be moving. This technology was called the “independent power takeoff” and a significant Canadian innovation during the 1940s.

The next piece of equipment was a specialized tractor used in vegetable fields which had a very slender nose and an engine mounted in the rear of the vehicle. The slender frontal portion would allow the farmer to see the vegetable planting much better. One of the popular displays at the Canada Agriculture Museum is a tractor simulator donated by the John Deere Company. You can climb up into the cab, look ahead through the windshield onto a simulated farmer’s field, and the simulator rocks you around in the cab as if you were in a real tractor plowing the field. David explained that today’s tractors actually have sophisticated GPS (global positioning systems) which keep track of which areas the farmer has already covered during planting so they don’t go over the same area twice or miss other spots.

The machinery exhibit area includes a variety of quizzes with questions such as what would be the link to the agriculture of a variety of everyday items. Diapers, photo film, and other products we commonly use actually contain agricultural by-products, and we don’t even associate them at all with farming operations. It’s amazing how many items we take for granted in our daily lives and how many of them are derived from agricultural products.

Then David took me into the Small Animal Barn which houses the pigs, chickens, rabbits, sheep, and goats of the Museum. Currently, the Museum has one ram and 17 ewes that all have one to three lambs per year. Apparently, pigs are surprisingly clean animals, they have a specially designated area in their pens for bodily functions and they keep their living area totally clean. David showed me the birth area for the pigs which is called a “farrowing crate”. It is a metal contraption that ensures that the mother pig doesn’t squash the newborn piglets, a very real danger with these sizeable animals.

Throughout the year, the Canada Agriculture Museum offers a comprehensive calendar of activities. I found out that the Museum is open 364 days a year with the exception of Christmas Day. All the facilities are fully accessible from March to October and during the winter months, admission actually is free.

Some highlights of the calendar include activities during Easter where you can see rabbits, newborn lambs, and newly-hatched chicks, not to forget the Easter egg hunt. Mother’s Day (with free admission for all mothers) centers on “farm mothers”, female animals that provide us with milk, eggs, and meat. I of course already caught the Sheep Shearing Festival on Victoria Day Weekend.

Special activities continue with Father’s Day where all fathers get free admission so they can enjoy the Tractors exhibition. Canada Day activities focus on the Canadian Horse while there are fun and informative demonstrations all throughout the summer months. Fall welcomes visitors with October Harvest Weekends and special Halloween events and from November 1 to February 28 admission to the museum is free altogether. In addition to regular visitor programs, there are a variety of School Programs that encourage teachers to bring children to the Canada Agriculture Museum to learn and experience a working farm in the middle of the city.

On our way out of the Museum David mentioned that the Museum will have a brand new exhibition starting in March of 2007 called “Food for Health” which will deal with making wise food choices, food handling, and various other nutrition-related topics. So that just means that next time I come to Ottawa I’ll have something new to discover…